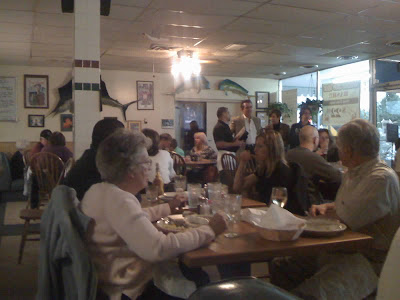 Dining out is supposed to be a form of escape. Having someone else make the food and clean up the mess helps get your mind off of all of life's little problems.
The last thing I want when I'm at a restaurant is to be smacked in the head with life's major problems, like poverty. That happened to me once during my Chicago college days, when I tagged along with my friend and her boyfriend to have lunch on the city's South Side. They were in search of authentic "soul food," and thought the predominantly black neighborhood just blocks from the University of Chicago would be just the place to find it.
It seemed like a fun way to spend the afternoon. I had never been the Chicago's South Side before. I was up for an adventure.
Well, "adventure" is probably the only positive spin I can put on this foolish outing. The neighborhood wasn't some hidden gem filled with tasty restaurants and interesting boutiques, it was a ghetto. I watched a 10-year-old boy set fire to a pile of wood on the sidewalk as we parked our car. Every shop had bars over the windows, and gang-symbol graffitti covered most of the buildings' walls.
I reluctantly got out of the car and followed my friends into a dingy storefront. All heads turned as we walked through the door. We were the only white people in the place--we were probably the only white people in the entire neighborhood. We were a walking target.
The restaurant was small, with just three or four booths. Nothing adorned the walls. We walked up to the counter to order food. "We want to try some soul food," said my friend's boyfriend. I wanted to crawl under a table. "Oookaayy," said the woman behind the counter, and handed us a menu. The look on her face confirmed what I was thinking, "What the hell are we doing here???"
Risking our lives by patroning this restaurant may have been worth if the food was good, but it wasn't. The ingredients were probably the best that could be bought with a welfare check. I could barely choke down the lard-cooked, flavorless pork chop I ordered. I lost total respect for my friend's boyfriend as I watched him happily tuck into a plate of what looked like Spaghettio's and deep-fried fish. I left the place with indigestion mixed with a bad case of the blues due to all poverty I witnessed.
I learned my lesson from that outing and from then on avoided restaurants in bad parts of town. So imagine my surprise when I'm smacked in the head with another one of life's problems--old age--while dining in Greenwood Village, one of Denver's wealthiest suburbs?
My husband and I got a long-overdue night out, and decided to try a seafood place. The restaurant got a great rating from Westword. We were giddy with anticipation until we walked through the door into a sea of white hair. It was like eating in the cafeteria of a nursing home. The man at the table next us had an oxygen tank propped against the chair and could barely hold his fork in his shaking hand.
I ended up ordering the ultimate senior citizen dinner--wall-eye with rice pilaf and steamed carrots and green beans. The meal's lack of salt may have been good for my blood pressure, but bad for my taste buds.
Like my experience on Chicago's South Side, I was transported to a place I didn't want to go. But at least this time, I had some good white wine with the meal to take the edge off.
Posted by Cathy at 8:15 AM

I laughed through your whole post! The only thing worse is being stuck on a bus trip with seniors (I went to a play once with my Grandma). The whole way home, they kept talking and complaining about the lunch, how it wasn't the same as last year, the pie wasn't as flaky, the fish was cold, etc. Over and over and over, like some bad late night infomercial.

Also, how did you sneak that photo without drawing attention? oh, I guess too many bifocals wouldn't notice that.

My husband and I recently went to a restaurant that is something of an Austin institution. They are proud that some of the wait and cookstaff have worked there for decades. Turns out their diners have have been there for decades, too. We were the youngest people in the place by at least 30 years. The woman at the table next to us was there with her nurse - no kidding.

At least the place had good pie, which we got to go and ate at home.

Oh dear. Well, is that better than everyone being like 22 and models?

You are an excellent writer. I so could envision the South Side and the sea of gray hair :) What's even worse?...Combine poverty and age. I see it daily in my job as a public health nurse. Makes me want to quit some days and run to the perfume counter. "Would you like to try our new fragrance?"

I would feel like I just stepped into the twilight zone or something. Haha!