I Scored Some Drugs 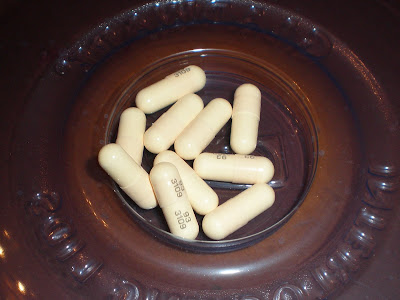 If I had to choose between a bacterially derived and a virally derived illness, I’d choose bacterial any day. Why? The drugs. At least with a bacterially derived illness, such as strep or an ear infection, you go to the doctor and he gives you a pill to make it all better.
This pill is more than just a drug to fight off the illness. It’s a reward for all the hard work and money it takes to see a doctor these days. When you rearrange your schedule to see the doctor, and shell out $30 or more for the visit, you want to feel like it was worth it. That doesn’t happen when you’ve got a virus. The doctors say, “There’s nothing you can do except rest and drink lots of fluids.” OK, explain how important rest is to my kids, whom, even with a 100 degree fever, still have enough energy to wrestle.
So how do you know whether a bacteria or a virus is getting you sick? I don’t know. Last week, Ethan complained of a sore throat. I got nervous when he said sore throat, but didn’t call the doctor because he didn’t have a fever. He stayed home from school one day, but then recovered.
Then James complained of a sore throat. I figured he got Ethan’s virus, and we should just ride it out. But after the second day, he started crying and couldn’t swallow anything, even his own saliva. He didn’t have a fever, but he seemed so miserable. I called the doctor. When the nurse heard he couldn’t swallow his own spit, she told me to come in. I grudgingly took him to the doctor, thinking they were going to tell me James has a virus. Nope—the strep test was positive. The nurse injected penicillin into his leg and all was well the next day.
Then I started to feel like crap. My throat was sore, but not so sore I couldn’t swallow my own spit. Was it bacteria or a virus that was causing me all this angst? Terry, whom doesn’t see a doctor unless he is puking lung, told me it’s just a virus. But, I had been exposed to James’ spit, which was teeming with bacteria—how could it not be strep?
After two days of agonizing and not feeling any better, I made an appointment with my doctor. At this point, I wanted to pay an authority to tell me if I needed drugs. I sat in the examining room, staring at a sign that stated “Most sore throats come from viruses, and antibiotics don’t help.” I felt defeated already.
The doctor finally arrived and examined my ears, nose and throat. I waited for the verdict.
“You don’t have strep throat,” he said.
“Oh,” I said.
“You have an ear infection,” he said.
“Oh!!” I said.
He wrote a prescription for amoxicillin, and I practically snatched it from his hand. I thanked the doctor and walked out of the office feeling perversely happy.
Posted by Cathy at 5:00 AM

I can imagine the look on the doctor's face to see your giddy reaction to his "ear infection" diagnosis... funny. Hope the drugs have don't their job.

It's weird - that strange sense of satifaction. that "yeah, I was right" thing that happens when you go to the Doctor and you REALLY ARE sick and you get a prescription and 'Yes, It wasn't all in my head, thank you'.

The fact that having an illness at all makes people happy nowadays speaks woeful tales for the US's healthcare system. Yikes. Hope you're feeling better though!

I had my first ear infection since childhood last spring, and i was stunned at how miserable I felt as a result. Hope the antibiotics kick in soon.

This is so true!

Hope that you're feeling better!

Viruses are evil. PURE EVIL!!! lol But strep is nasty, too. My daughter had it four times by her third birthday. Hope everyone is feeling better!

Glad you're feeling better! Or at least have the drugs to make you feel better! LOL I haven't gotten an ear infection in years, but I am a strep magnet. If I'm in the same building as a kid with strep, I'll get it and get it good. I'll be sick, my kids'll be fine. Figures. ;)

that's why it took me so long to go to the doctor when i had pneumonia earlier this year. i don't have insurance, so i couldn't afford to pay the doctor $100 just to tell me to take a nap and drink gatorade. but then it hurt to breathe and i couldn't get up. antibiotics to the rescue!

Hope you are feeling better. I was just blogging that no holiday is complete without someone getting sick!
I know what you mean about the virus vs infection. Just one more confusing thing to make us doubt our ability to be the all-knowing mom ;)

I never get really sick where I need drugs from the doctor. But about year or so ago I had a horrible sore throat. I thought it was just a bad cold. After about a WEEK I finally went to the doctor to find out that I had strep throat - I wish I had gone in sooner.