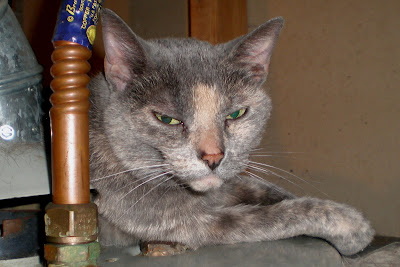 I screeched my car to a halt in front of Vitamin Cottage, and got James and Ethan out of the car. We were late for Ethan’s camp, but he insisted that I get him some bread to feed the ducks at the park where they were going. While I was in the store, I picked up a bag of food for our cat Molly. I didn’t immediately see the orange bag of Iams cat food, but with James running up and down the aisles and Ethan telling me to “hurry, hurry!” I did the next best thing. I grabbed a bag of food that had a bear catching salmon from a stream on it, paid for it, and hightailed it to camp.
Later that evening, I finally got around to reading the bag’s label—this was Taste of the Wild food for dogs, not cats. Uh-oh. But the nuggets were small enough for her to chew, plus it’s got salmon in it—it won’t kill her to eat it. I left Molly in the basement, dubiously sniffing the food.
The next day, her food bowl was still full. Well, she’s got to be hungry enough now to eat it. It’s not like I filled her bowl with Captain Crunch cereal and told her to make the best of it. But by 4 pm, one hour before her feeding time, she followed me around the house, meowing. Her incessant yowls started to sound like “Feed, me! Feed me!”
I couldn’t take it anymore. I drove to Target and bought Iams cats food for seniors. When I got home, I swapped out the dog food with the cat food. Molly immediately began chowing down. I came back to the basement an hour later to put a load of laundry in the wash. Molly was lying on the water heater in a food coma. Almost all the food in her bowl was gone.
Our game of chicken was over, and Molly had won.
Posted by Cathy at 5:29 PM

cats are so opinionated, they have such personality that's what i love about them!

I lose contests to Apple every day. Don't feel bad.

Cats always win in the end!There's no creature more determined :-))

That's a cat for you. You do realize, the cat owns you, not the other way around, right?

And Molly looks just like a cat I had before I got married and my parents now have. The only difference is that my cat has a "4" in the orange colored fur, which is on her forehead. That's why her name is "Four." No, it wasn't my idea. She had that name before I got her.

Our neighbors insist that their cat will eat nothing but premium food, yet I catch the cat eating out of our outdoor cat's foodbowl on a regular basis. Seems she like meow-mix just fine as long as it's not in her bowl.

I hate how picky cats are. Of course ours will only eat a certain brand that looks like it's being discontinued. I guess he'll have to get thinner over the next year, if he won't eat it.

LOL! Smart cat. Seems like she has you trained :)

What a funny little thing! And pretty too.

too funny!!! you would have thought once she got hungry, she would have eaten anything.....but then she is a cat and not a corgi like our dog

glad she is happy and content once again with her food!

Yeah, Rosie does that too. Must have wet mixed into her dry. Princess...LOL