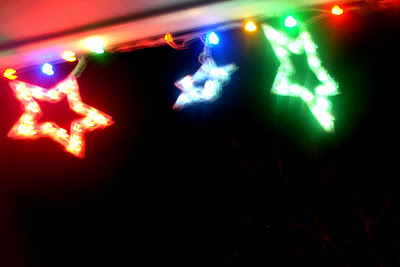 A crystalline night.
Plastic lights burn hope into
Deep into the sky.
Happy Holidays, everyone!
Posted by Cathy at 7:58 PM 15 comments 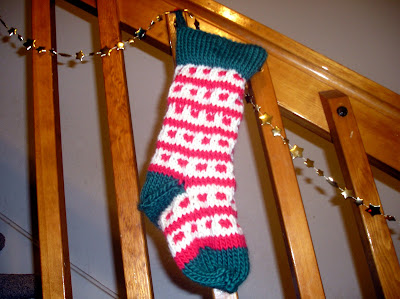 How do you know when your “mommy guilt” has gotten the best of you? When you knit your son a Christmas stocking, and he tells you to give it to the cat.
Last year, I wrote about how I guiltily “fast-tracked” a Christmas stocking for James by buying some premade felt ornaments and gluing them on a felt stocking I whip-stitched together. This stocking took me a few hours to make, compared to the many, many hours I spent sewing sequins on Ethan’s Christmas stocking. James’s stocking had the same glittery impact as Ethan’s, but deep down, I thought it was a sham.
Then, in October, I saw a pattern for a knitted stocking, and I had to buy it for James. The stocking took a few weeks to knit, compared to the few hours I spent on James’ first stocking. The amount of time I put into this project helped me write off my mommy guilt.
I confidently presented the stocking to James, anticipating his face lit up with joy over my effort. But instead of “Wow!”, I got “Eh.” What’s wrong? “Don’t you want this stocking instead of your old one?” I asked. “No,” he responded. “You should give it to Molly.”
I had gotten it all wrong. James didn’t care how many hours I put into a project, he just wanted a glittery stocking like his big brother’s. I should have left well enough alone.
So, Molly, what do you want for a stocking stuffer?
Posted by Cathy at 8:58 PM 8 comments

I’ve made body scrubs before using brown sugar and light vegetable oil, but I was never really satisfied with the results. The scrub was sticky and would clump up when I tried to rub it on my skin. Then I found a recipe in Janice Cox’s book, Natural Beauty All Seasons, which intrigued me. The recipe called for milk along with the usual sugar and oil combination. Here it is:

Combine the ingredients. Before you bathe, rub on skin to slough off dry, flaky skin and improve circulation. Rinse off.

I tried the scrub out last weekend and loved it. My skin felt smooth and moisturized after using it. According to Cox’s book, the protein, calcium and vitamins in dairy products make them good cleansers. They also contain lactose, an alpha hydroxy acid that gently sloughs off dead cells.
Plus, the scrub appeals to my eco side because I'm not washing harmful chemical preservatives, which are found in many commercially made products, down the drain into our water system.
So during these dry winter months, whip up this simple, eco-friendly body scrub to keep your skin smooth and soft.
Posted by Cathy at 10:04 AM 13 comments

Have You Seen This Skunk? 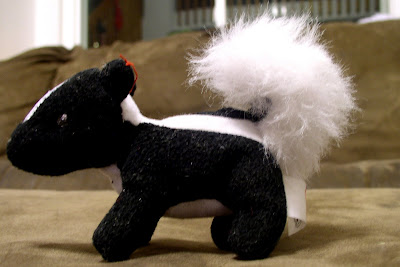 Recently, our household has undergone a major tragedy. Someone has gone missing.
But before you start checking the news for Amber alerts, let me tell you who the victim is—a stuffed animal skunk whose name is Skunkers.
Skunkers 1 and 2 became a part of our family a few months ago when we dined at McDonald’s. Ethan and James each got a Happy Meal, which also happened to be the home of a stuffed animal skunk. Of course I let them take the darling creatures home. Ethan and James named their skunks Skunkers, played with them intensely for a few hours, and then tossed them in their rooms’ stuffed animal heaps.
Unfortunately, it wasn’t until Skunkers 1 went missing that I realized he how important he was to James. Their fun times came to an end when we bought our new couch.
See, we not only got rid of Couchy to make room for Mr. Couch. We also got rid of a recliner, which, unbeknownst to me, was the home of James’ skunk.
A week ago, James tearily accused me of my crime. I was sitting at the dining room table working on my lap top when he approached me. “Mommy!” he said. “You got rid of Skunkers!”
“What are you talking about?” I asked. “Here’s Skunkers,” I said, pointing to a stuffed skunk laying our living room carpet.
“That’s Ethan’s Skunkers,” he explained. “We played a game with both skunks and I put mine in between the cushions of the recliner and now you’ve gotten rid of the recliner so now he’s gone!!!” His balled-up fists pressed against his eyes to stop the flowing tears.
I swallowed down my panic. “James, I’m sure you didn’t leave Skunkers in the recliner. He will turn up. In the meantime, why don’t you play with this skunk?”
“No!” he said. “That’s Ethan’s skunk. Mine is gone!”
Over the past week, I’ve hoped James’s accusations were wrong, but Skunkers 1 has yet to appear. So now I’m putting out own version of an Amber alert, asking that if you happen to see a skunk that looks like the one in the photo, please send him our way. It will make one mommy—I mean boy—very happy.
Posted by Cathy at 9:40 PM 10 comments

Make Your Own Baby Leg Warmers 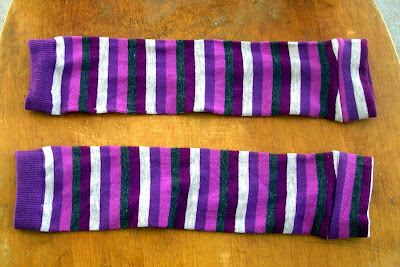 There’s a new baby in my life—my 2-month-old niece, Domenica. I wanted to make her some BabyLegs, which are legs warmers for babies. They cost $12 online, but are super easy to make with knee-high socks you can purchase for one-third the price at Wal-Mart or Target.
This past weekend, I refreshed my memory on how to make BabyLegs by looking over the post I wrote on it a year ago. I realized I added an unnecessary step to make the cuff, so I eliminated those steps in the post. The new, improved post titled, “Cheap Socks Make Great Gifts,” can be found in the right-hand sidebar titled “Tutorials.”
I wanted to take a photo of Domenica in her new BabyLegs this past weekend, but she slept the whole time I saw her. And we all know to never wake up a sleeping baby, even for a blog photo.
Posted by Cathy at 10:00 AM 13 comments

Holidays are on their way, these decorations have so much to say.

"In The Mall," Weezer

I personally don't brave the mobs to hunt down bargains on Black Friday, if you do, may I suggest downloading Weezer's song, "In The Mall," into your ipod. This song takes me back to shopping days of yore, when my biggest concern was sneaking a box of Mike & Ike's Hot Tamales candy into the movie theater for the premiere of The Princess Bride.

Have a wonderful Thanskgiving holiday, everyone.
Posted by Cathy at 9:57 AM 9 comments

American Girl, I Don't Think So 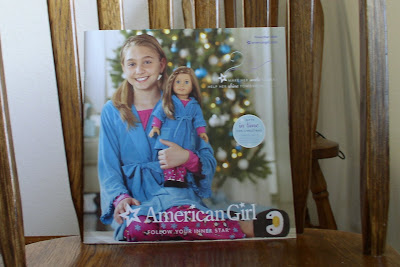 Ordering my sons something for Christmas from this catalog would, in their minds, be the equivalent of putting lumps of coal in their stockings.
Posted by Cathy at 9:52 AM 12 comments